Strong visual skills are critical to sports success. Your eyes instruct your hands and body as to what to do. Vision Therapy can improve eye-hand coordination, depth perception, visual reaction time, peripheral awareness, eye teaming, focusing, tracking, and visualization skills (to mention just a few.  Vision Therapy has helped many children and adults enjoy new found Success with Sports and Coordination!

The Arizona Cardinals' Larry Fitzgerald is arguably one of the best wide receivers in the NFL.  Photographs frequently captured Fitzgerald catching a football with his eyes closed, because he is using vision in his brain, rather than just in his eyes.

At the beginning of Fitzgerald's record-setting 2008 postseason, he had six catches for 101 yards and a touchdown in a wild-card win against the Atlanta Falcons -- and at least one eyes-closed catch.
[+] Enlarge 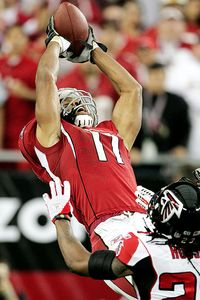 Gene Lower/Getty Images
Look closely and you can see that Cardinals receiver Larry Fitzgerald's eyes are closed as he makes this touchdown catch against Atlanta in January.
Cris Carter, a Hall of Fame finalist who has known Fitzgerald, 25, since he was a teenage ball boy with the Minnesota Vikings, says Fitzgerald is already thinking past the catch.
"I can guarantee you he has practiced catching the ball with his eyes closed, but he's not catching the ball with his eyes closed,"
Fitzgerald's grandfather, Dr. Robert Johnson,an optometrist practicing in Chicago, taught Fitzgerald from the age of 8 to strengthen his vision. Johnson taught him to cover one of his eyes with one hand and catch a tennis ball with the other. Johnson also used multiple technical vision tests and exercises to refine Fitzgerald's visual skills and to focus and enhance his peripheral vision.
Fitgerald recalls Vision Therapy when he was younger: "He used to have me doing things like merging pennies together to strengthen my eyes, or read a sign with numbers or letters to strengthen my eyesight," Fitzgerald says. The pennies exercise involves visually merging two pennies into one.
Johnson says Fitzgerald grew through his visual awareness.
"He learns how to see the object," Johnson says. "He has learned that 'I can concentrate on the forest, but I am still going to be aware of the tree.'"
In football terms, the forest is the collection of 21 other players on the field; the tree is the ball. Johnson says the visual training began when his grandson was young because of academic reasons, not because of sports.
"Larry came because of a learning problem, but his learning problem wasn't because of his brain," Johnson says. "It was because he could not remain focused. I would say, 'Larry, why don't you stay in your seat at school?' Or 'What are you doing? You are not paying attention.' He said, 'Granddaddy, I am really thinking about how I am going to get past the guy in front of me with the ball.'"
Fitzgerald, who grew up just outside Minneapolis, used the visual training exercises he learned from his grandfather and came up with his own drill at home. Every night while in bed, in a pitch-black room, Fitzgerald would toss a football up in the air and try to catch it. His father, Larry Fitzgerald Sr., says he remembers hearing the ball thump on the floor when his son missed. His son remembers differently.
[+] Enlarge 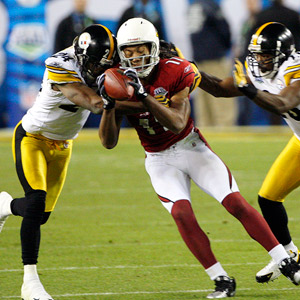 AP Photo/Matt Slocum
Fitzgerald also was caught with his eyes closed making a catch during the Super Bowl.
"I would always catch it," he says. "& It looked pitch black in there, but I just wanted to feel it. Feel where the ball was at. I ... have an innate ability to just feel."
Fitzgerald eventually acknowledged he didn't catch the ball every time. "I took a couple of lumps on the head over the years," he says, "but I caught the majority of them."
Fitzgerald doesn't wear glasses much at all. Nor does he wear contact lenses.
In the playoffs this past season, Fitzgerald had 30 receptions for 546 yards and seven touchdowns. Following the spectacular three-touchdown performance in the NFC Championship, and the late heroics in Super Bowl XLIII, Fitzgerald has been mentioned along with some of the best wide receivers ever in the NFL. Even former receiver Jerry Rice -- Fitzgerald calls him the G.O.A.T. (Greatest Of All Time) -- says Fitzgerald is the best in the game right now.
Fitzgerald says he is so focused -- despite the noise and traffic on a football field -- when the ball is in the air, "everything gets real still for me."
"It's like it's in slow motion, and then when I finally catch it, everything speeds back up," he says. "I don't really hear anything."